Lean and Six Sigma in Healthcare

Patient care, by definition and commonly accepted logic, is a set of people-engaging processes.  Many of those processes have severe impacts if taken too long to complete, or if included with errors.  Yet, healthcare is a bit of a final frontier compared to other industries for fully embracing the methods, techniques, and tools of Lean and Six Sigma.

Once Lean and Six Sigma are understood, applied, and adopted, the improvement opportunities are endless!  So, let’s help move that along by citing a case study in healthcare and looking at the benefits.

During conversion of several systems at a 300-bed hospital, the pharmacy dispensing area and Medication Administration Record System (MARs) was noted as having several errors. Errors in ordering and dispensing medications had several unknown source errors and were a source of risk, patient dissatisfaction, strained relationships in hospital personnel, and low employee morale.  IT system “fixes” had been previously installed, but little change was noted in reduction of errors. It was decided to apply Lean and Six Sigma to resolve errors as part of the conversion. 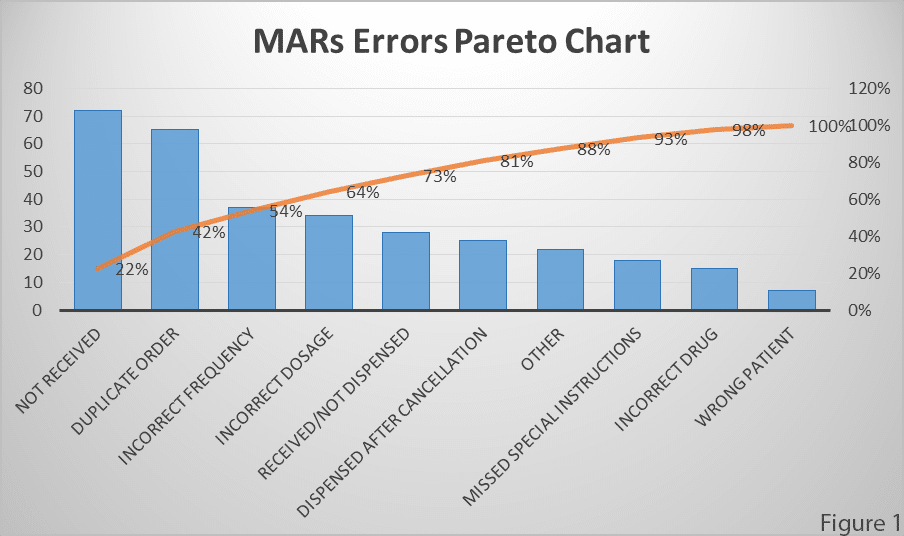 The blue bars in Figure 1 denote the errors in the month previous to the start of the Lean and Six Sigma initiative.  Note that Not Received, Duplicate Order, and Incorrect Frequency account for over 50% of the errors. Figure 2 captures the number of errors by pharmacist.  Note that 56% of the errors are accountable to only three of the pharmacists. 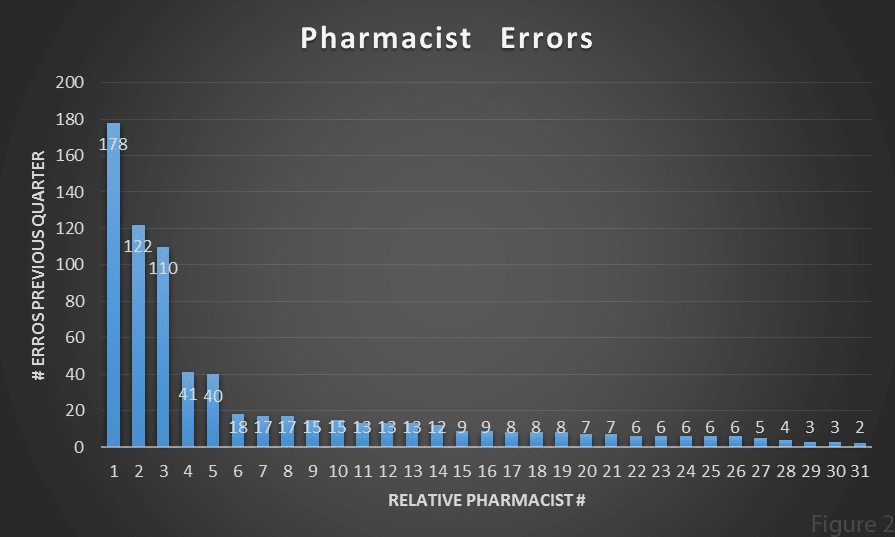 System changes were made to Computerized Physician Order Entry (CPOE) specific to medications orders, and re-training of physicians, nurses, pharmacists, and shift supervisors was completed.

Lead pharmacists were assigned by hospital units and co-located with nurse shift stations.

Lead pharmacists were included in the weekly nurse meetings with co-facilitation of the standing agenda by the Chief Nursing Officer and the Chief Pharmacist, with focus on quality, collaboration, and timely resolution of trending issues.

Figure 3 shows most of the errors have been dramatically reduced, with a total number dropping from 323 the month prior to the start of the Lean and Six Sigma project to 73 the third month following implementation of the improvements.  Figure 4 shows a significant reduction in errors for pharmacists due to the standardization of process and procedure, education and training, nurse/pharmacist collaboration, and tighter supervision.